Craig Alan was born in 1971 in San Bernardino, California. Though always drawn to art, Alan’s creativity did not fully develop until his family transferred to New Orleans while he was a child. Inspired by the city’s enthusiasm for creative expression he began exploring his innovative impulses. Later at the University of Mobile, Alabama, he earned an award for academic excellence.

Alan’s artwork reveals a technical sophistication as well as an elaborate imagination. His collections run the gamut from abstract expressionism to haunting, graphic realism, each one a reflection of its creator’s unique vision. He exhibits across the United States, and has established himself as a singular voice in the visual arts industry.

World of Many Shades 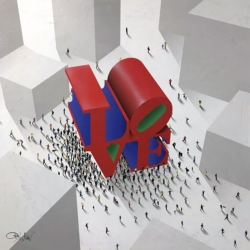 Love Around The Corner