Born in Seoul, South Korea on September 14, 1949, Myung “Mario” Jung began his promising career as a professional artist in the mid 1980’s.Graduating from the Seoul Industrial Junior College in 1971, Mario longed for his artistic talents to take flight and in 1986 he entered the Exhibition of Fine Art of the Seoul Artists Association where he was awarded the Grand Prize of Western style painting. Due to this immediate success, Mario was invited to become a member of the Seoul Artists Association, which he has now been a member of for over 30 years.
His life changed dramatically when he was paralyzed, blinded and deafened as side effects from a catastrophic, third-story, balcony fall. Not even interested in food, Mario was giving up until he had a spiritual dream that renewed his strength and his will to live.
Read more ...

This Land is My Land

Under The Blue Sky

The Path I Take 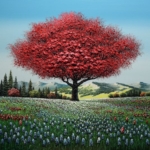