Tom Everhart (born May 21, 1952 in Washington, D.C.) is an American artist. He is the only artist authorized to paint Peanuts comics strip characters.

In 1980, he was introduced to cartoonist Charles M. Schulz at Schulz's studios in Santa Rosa, California. A few weeks prior to their meeting, Everhart, having absolutely no education in cartooning, found himself involved in a freelance project that required him to draw and present Peanuts renderings to Schulz's studios. He blew up some of the cartoonist's strips on a twenty-five foot wall in his studio, which eliminated the perimeter lines of the cartoon box, and left only the marks of the cartoonist. Schulz's painterly pen-strokes - now, larger than life - were translated into painterly brush-strokes: they were now in a language that overwhelmingly connected to Everhart's own form of expression and communication. Completely impressed with Schulz's line, he was able to reproduce the line art almost exactly. This, in turn, impressed Schulz at their meeting. It was at this time that Everhart affirmed his obsession with Schulz's line art style, and began their ongoing relationship of friendship and line style education. 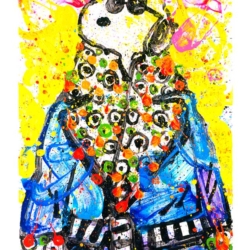 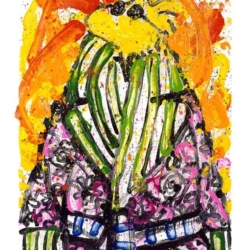 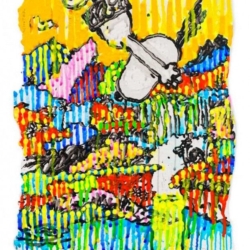 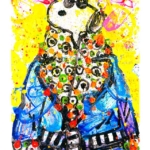